These days there is a debate amongst us regarding machines and human. While it was the legendary Karl Marx who once said that “The machine, which is the starting-point of the industrial revolution, replaces the worker, who handles a single tool, by a mechanism operating with a number of similar tools and set in motion by a single motive power, whatever the form of that power. Here we have the machine, but in its first role as a simple element in production by machinery.” As we write, we find that machines are doing the job of low skilled labour force and Business need high skilled work force to maintain the criticality. So, though job market has been decreasing in Europe, the same is increasing in the Asian Region. However, it has been observed that innovation has transformed living standards as Life expectancy has gone up; basic health care and education are widespread; and most people have seen their incomes rise, as per the World Development Report 2019.

So, do we have enough jobs for the huge population of the World? That’s the question that needs an answer as I am trying to find out if this response can be entrepreneurship. Many of us goes into depression & frustration because either our job does not provide our expectations or are not able to provide us the right scopes or opportunities. With limited possibilities and huge competition, one need to harness one’s inner talent and skills to gift something beautiful to the world in the form of entrepreneurship or small business.

As, I researched on this subject and after analysis found out that to be a successful entrepreneur one need to make ones third house (from ascendant) strong. This house leads to inner efforts, allows one to take major initiatives, foster new ideas, infuses hopes to conquer one’s dream. It’s also true that not everyone’s third house from ascendant as per Vedic astrology will be strong or may be influenced by malefic planets but if you really want to make it a success, one need to make this house sturdier.

If the third house lord is situated in Capricorn for libra ascendant, then it is clear that the third house lord is debilitated in the Lagna (Ascendant) or D1 chart, which will reduce the inner motivation process in an individual. But does that mean that the individual never can bath in the success of glory in entrepreneurship? The answer is negative as everyone can become an entrepreneur if we take advice from this astrological planet and the materials it represents. So, the more you gain knowledge, be in touch with well-informed persons, the more you become enlightened to add strength to your debilitated Jupiter. Personally, I believe that everything is possible in the world and every problem has a solution, it’s just how you look at it. Entrepreneurship is achieved through various combinations and one amongst them is, if the third lord is positioned in the tenth house or the eleventh house, the native tends to become an entrepreneur. With ideas flowing, this native can become leader of one’s own finances. However, it also needs to be seen, whether the third lord has strength in the tenth or eleventh house or it is afflicted by any other malefic planets like the karmic planets lord Rahu and lord Ketu. Friendly signs and well positioned third house planets create opportunities through Ideas and when one works on one’s own idea, wonders start happening!

Depending upon which planets rules your third house, your dreams, ambitions, visions of your future are shaped. However, Nakshatras also play a very important role in one’s dreams and shaping one’s career. By that means, I mean to say that Lord Moon and its connection with the third house lord also determine inner wishes on the type of entrepreneurship.

Let’s take the example of one of the greatest entrepreneurs of our times and lets analysis the horoscope chart based on our discussion: 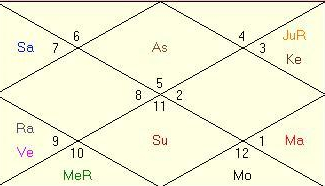 (Vedic Horoscope Of An Inventor, Creator & an Entrepreneur – received from websites)

From the Vedic horoscope chart as received from the web, we can observe that this gentleman had his third house as libra, which makes him very honest in his endeavours and is the lover of beautiful things in the world. With exalted 7th lord Saturn in the 3rd house encourages him to gift something beautiful to the world. Now, if you observe carefully then you will find that Astrological Planet Venus is situated with planet Rahu and hence the power of Venus enhances significantly in the house of creativity i.e 5th house from the ascendant, which resulted in creation of the first keyless phone in the world. Again, as I mentioned earlier that if there is a connection between the house of fame, name of profession i.e the tenth house with 3rd house, it creates an entrepreneur. If you look at the Vedic horoscope, you can find that the tenth lord and the third lord is same and is sitting in the fifth house of creativity, which resulted in creation of one of the greatest designers & innovators of the World: Mr. Steve Jobs.

Entrepreneurship may or may not be a challenge and I have a piece of advice to my readers to strengthen your third house, which will ultimately help you to perform in business. Wish you all the best in your entrepreneurship and business endeavours.

For any detailed horoscope analysis and astrological consultations/suggestions, you may click the above link at the header menu or may email me at: mainak_micro@rediffmail.com

The above write up is a general prediction and are my personal views which may not match with astrologers or others. While Destiny is hard work and luck, we wish everyone great success in one’s good endeavours. The above article is based on my experience of reading astrology subject and looking into the practicalities of the situation based on horoscope analysis for all these years.

Entrepreneurship, Creating Your Own Business Destiny – An Astrological Analysis (Article 68)

The History of the World had witnessed so many ups and downs. It has gazed Empires rising and fall, it has seen business rise from the scratches and lost in the mists of time. Over years, this planet had watched new Generations rise to innovative solutions only to address the immediate problems of all living species and had created business out of nothing.

Some of the world’s greatest organizations have started their journey due to a vision, which addressed human’s immediate problems and outshined all for years. They still exist and inspire, because either they are very streamlined or they have carried the ethics and values of their ‘founding figures’. The world is a much better place as the fabulous stories of those great entrepreneurs encourage us, motivate us, inspire us to see the world in a new way and help us in creating a spark in ourselves even in times when we are in distress, depression and tribulations.

Read in Detail The Latest Astrology Article on Entrepreneurship and Please Do Not Forget To Place Your Comments.

It was one evening when I was thinking about the Kafkaesque of Health Sector and the plight of the people of the World, where poverty crosses their coping capacity to see health as their fundamental right. In many places there are greater humans who have ameliorated better policies for improvement of people, who are less privilege. How much Infernal interminable problem it may seem, all dilemma can be solved through endurance and fortitude. As an Astrology writer, I have an inner feeling that our world is going to be better in terms of Healthcare. I wish that my dream may come true. As my inner mind confabulated on the same, in this article I thought of writing about the year 2020 and the impact of the cosmic sky on the Healthcare System of United States of America.

Healthcare issues have always been a peregrination journey for United States. It’s not only United States, I feel that every Nation needs a very comprehensive healthcare policy. That will help our brothers and sisters in all parts across the globe to live better and healthy.

So, what does Vedic Astrology foretells about United States in the year 2020 on the Healthcare Sector?

May I Invite you to read my Astrological Write-up. Thanks once again for your time and support. Click on The Heading Link To Read More…